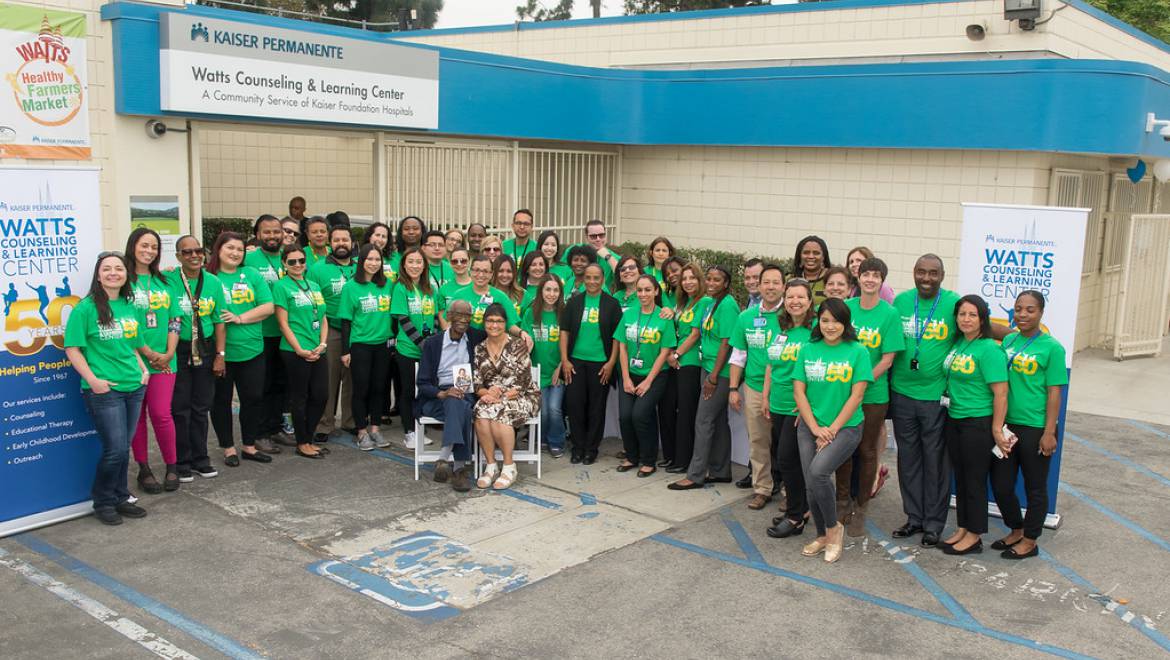 The Watts Counseling and Learning Center team is dedicated to “helping people grow.” 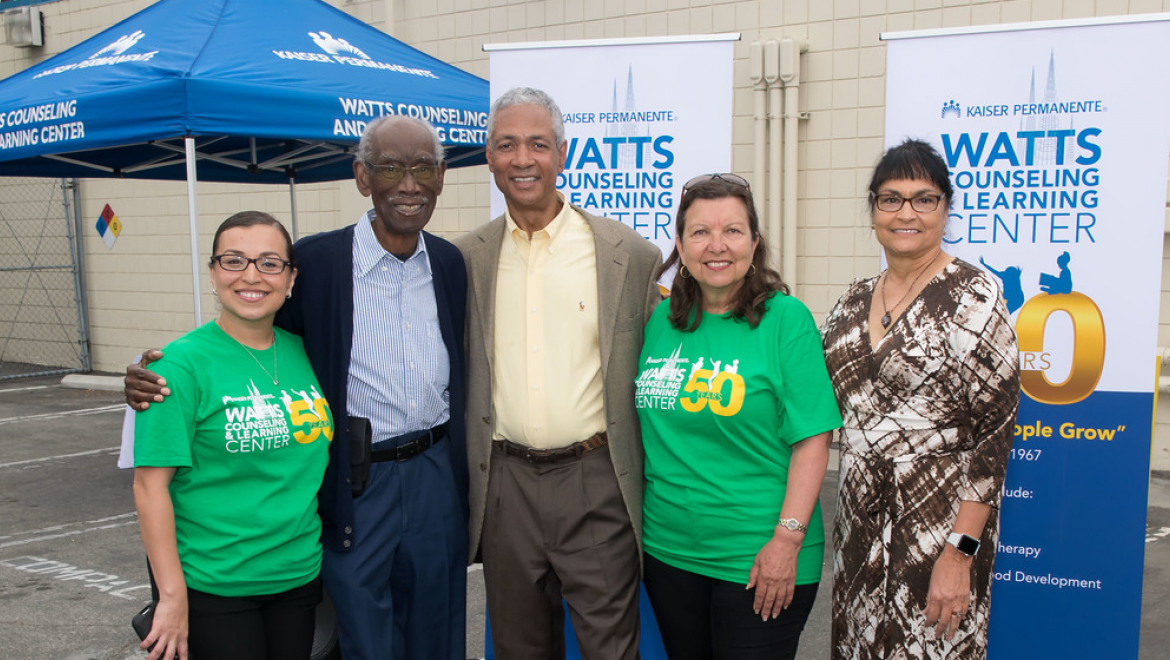 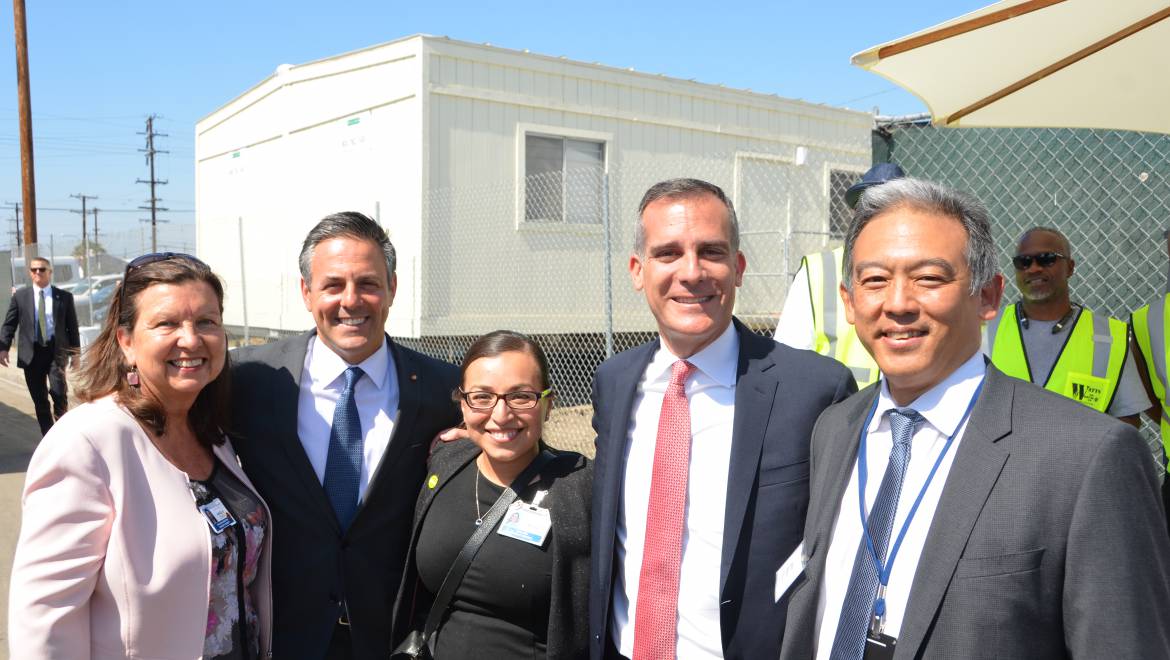 For Stephen Wilson, the Kaiser Permanente Watts Counseling and Learning Center in the South Los Angeles neighborhood served as a vital refuge throughout his youth.

For Stephen Wilson, the Kaiser Permanente Watts Counseling and Learning Center in the South Los Angeles neighborhood served as a vital refuge throughout his youth. Whether he received tutoring help after school, a nourishing snack, or thoughtful presents during the holiday season, the Center’s encouraging staff provided assistance when Wilson needed it most.

“I don’t know where I would be without this Center,” said Wilson. “It’s a safe haven that keeps kids out of trouble. They gave me support I wouldn’t have gotten at home. This is my family. I love them and they love me.”

Now age 32, the social work major is helping others as an intern at the Center where he, and later his two daughters, also attended preschool. “I wanted to give back to the place that gave me so much,” he said as a staff member passing by gave him a hug.

Wilson was among the more than 150 city representatives, community members, current and former Center staff, and more who attended the June 7 Open House honoring the Center’s 50 years of service to the community. The event featured awards recognition, site tours, food, music – and a lot of joy, laughter, and hope for the future.

“It feels wonderful to see the Watts Counseling and Learning Center celebrate 50 years,” said Bill Coggins, the Center’s founder and first director. “I always imagined it would be a great place.”

“Sweet” Alice Harris, a member of the original “core mothers” Coggins regularly met with while developing the program, agreed. “It’s great to see how far the Center has come,” said Harris.

Annette Bozeman, whose mother, Christine Caraway, was a core mother, said the Center played a major role in helping her develop her self-identity during a turbulent childhood. Bozeman details her experience and gratitude for the Center in her new book aptly titled, “The Center.”

“We are honored to be part of the Watts community and to commemorate this important milestone for the Kaiser Permanente Watts Counseling and Learning Center,” said Julie Miller-Phipps, president, Kaiser Permanente Southern California. “We look forward to a bright future supporting the people who live, work, learn, and play in Watts and its surrounding communities.”

“The success of the Center’s first 50 years has been amazing,” said Maria Aguirre, director, Watts Counseling and Learning Center. “We are excited about doing even more in the next 50 years to help continue meeting the needs of the community.”

The Kaiser Permanente Watts Counseling and Learning Center opened two years after the 1965 Watts civil unrest to provide essential mental health and educational resources to children and their families. Half a century later, what began in a small room in a prefabricated building with three employees has grown to a 9,000-square-foot facility with a team of 30 therapists, teachers, counselors, and other staff members whose motto is “Helping People Grow.”

Since its founding, the Center has continually expanded and diversified its programs to cover a wide range of culturally relevant mental health, educational, and youth outreach services. Kaiser Permanente Southern California funds the Center as a Community Benefit program. Families do not need to be Kaiser Permanente members to utilize the Center’s services.

Other Events in the Spotlight

The Open House for the Center’s 50th anniversary was among several special events this week in South Los Angeles. On June 5, new residential construction broke ground in Jordan Downs – a 1940 and 50s-era public housing development – as part of a large-scale effort to revitalize the community. Kaiser Permanente received a city proclamation at the groundbreaking acknowledging its long-standing commitment and work to improve the Watts community.

At a news conference on June 10 at 109th Street pool, Kaiser Permanente representatives, and elected and community leaders, announced this year’s Operation Splash program will focus on young women’s athletics and water polo, a sport traditionally played by men. Kaiser Permanente awarded a two-year grant to the Los Angeles City Department of Recreation and Parks Aquatics Division through its long-running Operation Splash program, which teaches children and adults in low-income areas to swim.

And on June 11 at Fremont Wellness Center and Community Garden, the Los Angeles Neighborhood Land Trust celebrated the addition of 25 green spaces over the past 15 years in some of LA’s most diverse, disadvantaged areas. Kaiser Permanente was pleased to contribute to the Land Trust, allowing them to continue work on parks and gardens in the Westlake, East Compton, West Carson and Watts communities.

For more information about Kaiser Permanente Southern California, follow us on twitter @KPSCALNews or go to https://share.kaiserpermanente.org.