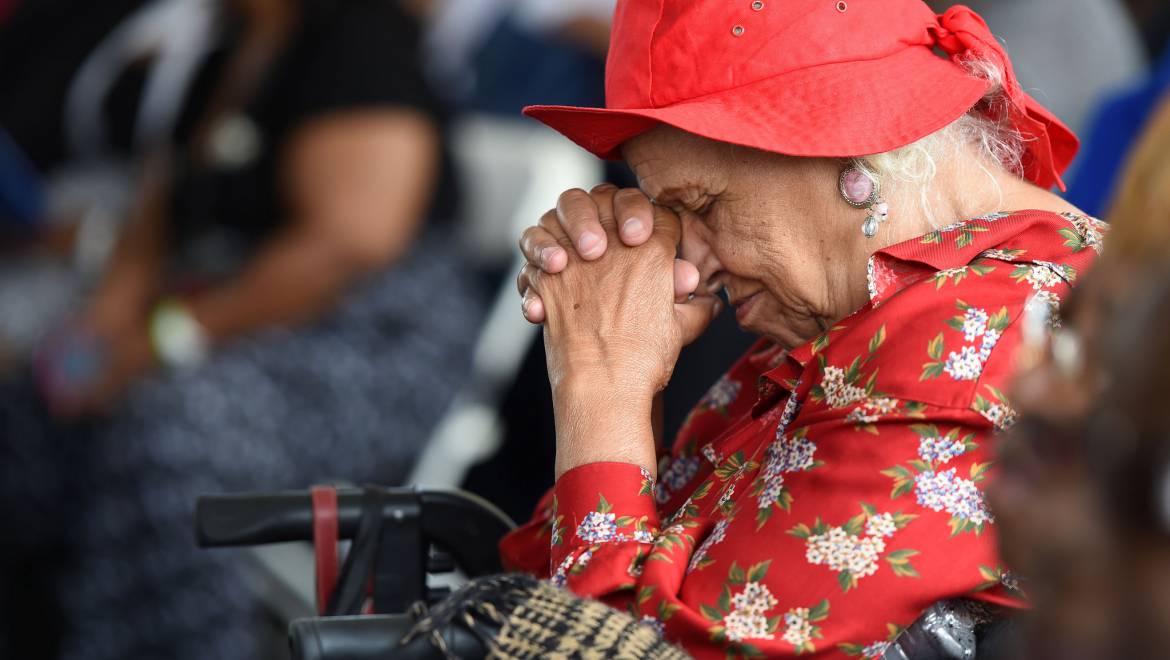 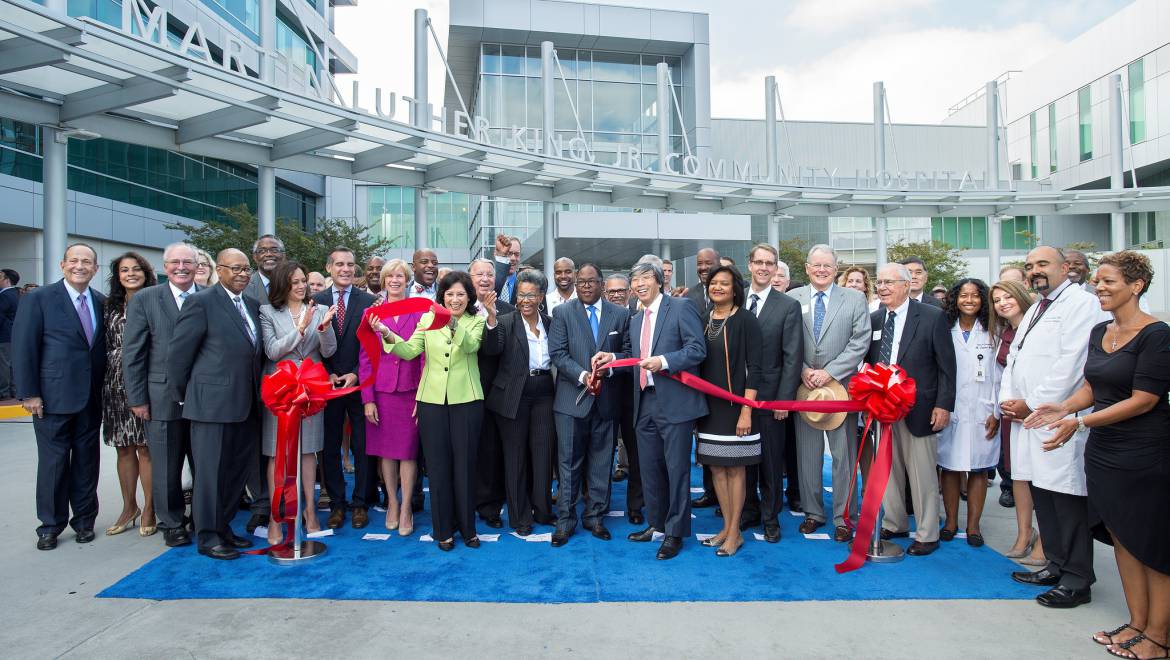 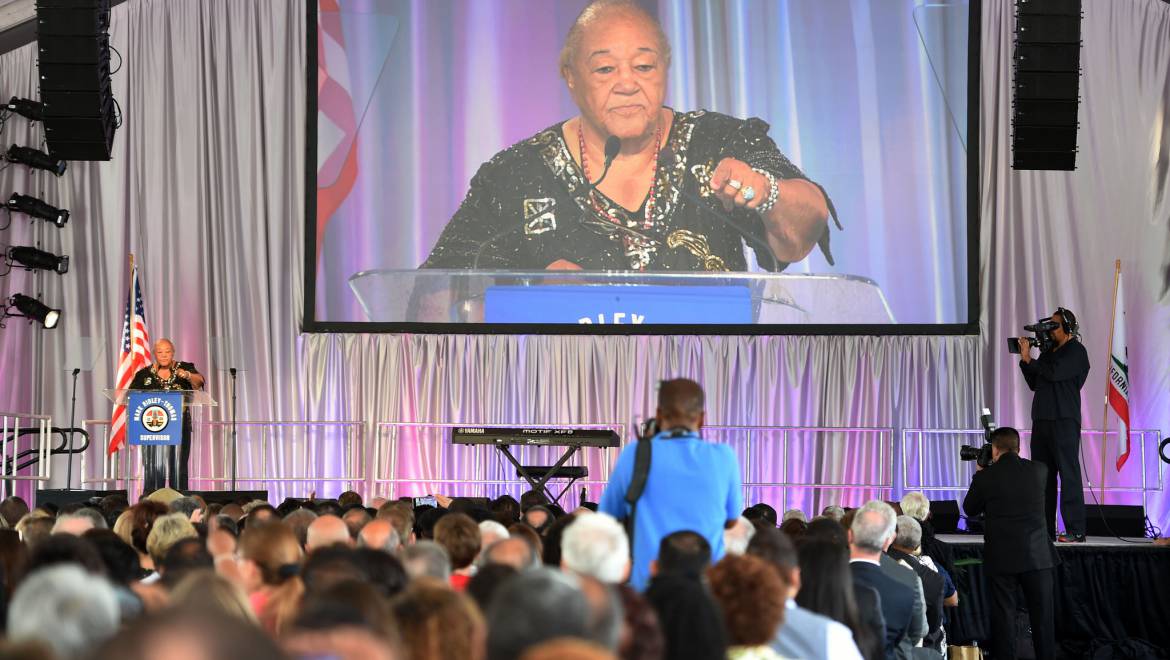 “Before, we would have to take two busses to get to the next hospital,” said “Sweet” Alice Harris, founder of Parents of Watts and guest speaker at the Martin Luther King, Jr. Community Hospital dedication ceremony, held recently in South Los Angeles. “If your child had asthma, they would die before they got there… and when you talk about Watts riots, we rioted because we were hurt. We ain’t hurt no more, and we don’t have to act out.”

Cheers erupted from the crowd off approximately 2,000 community members, leaders, elected officials, donors and others who gathered to celebrate the milestone event, which was held on the eve of the Watts Riots 50-year, week-long commemoration.

Hosted by Los Angeles County Supervisor Mark Ridley-Thomas, the dedication ceremony was an opportunity both to celebrate new beginnings, and acknowledge the old hospital’s shortcomings. Dubbed “Killer King” by residents for its chronically poor service and care, the old County hospital was forced to close in 2007, some 35 years after its opening, for failing to meet basic standards.

The new 131-bed facility will provide round-the-clock inpatient care, with general medicine, emergency and intensive care, as well as maternity and surgical services. The hospital cost $250 million, and sits on a $650 million, 42-acre campus that includes an outpatient center, a wellness village, a center for public health, a mental health urgent care center, a psychiatric center and more.

In 2014, Kaiser Permanente Southern California’s Community Benefit awarded the hospital a $2 million grant to assist with the expansion of labor and delivery. According to the Community Health Councils South L.A. has the highest rates of preterm births, infant mortality and low birth weight babies. This grant will make it possible for the new state-of-the-art hospital to support and increase the number of healthy deliveries for families in the community. In addition, the grant will support the new hospital’s Healthy Babies, Healthy Beginnings initiative to provide high-quality maternity services to families throughout South Los Angeles and its surrounding communities.

Located in Willowbrook, in the heart of South Los Angeles, the Martin Luther King, Jr. Community Hospital will serve nearly 1.35 million residents from Compton, Inglewood, Watts, Lynwood, and surrounding communities that, for years, had been medically underserved.

“This is an important addition to our community… it’s been a long time coming,” said Tonya Marlow of Inglewood. “It means better health. When you have doctors and nurses who are from the community, it builds trust. It lets us be more honest and open about what we are really feeling, so we can get the care we need,” she added. Marlow has lived in the area for over 35-years, and she still recalls the rise and fall of the old hospital. “This is a welcome change.”

“Sweet” Alice echoed that sentiment in her remarks. “If you were in labor, you had to have the baby before you went to the hospital,” recalled the community organizer during a moving presentation that was part sermon, part uplifting call to action. “Oh, this is the day. We don’t have to worry [anymore]!”

The hospital officially opened its doors on July 7, 2015. For details about the hospital, including hours and services, visit http://www.mlkcommunityhospital.org.