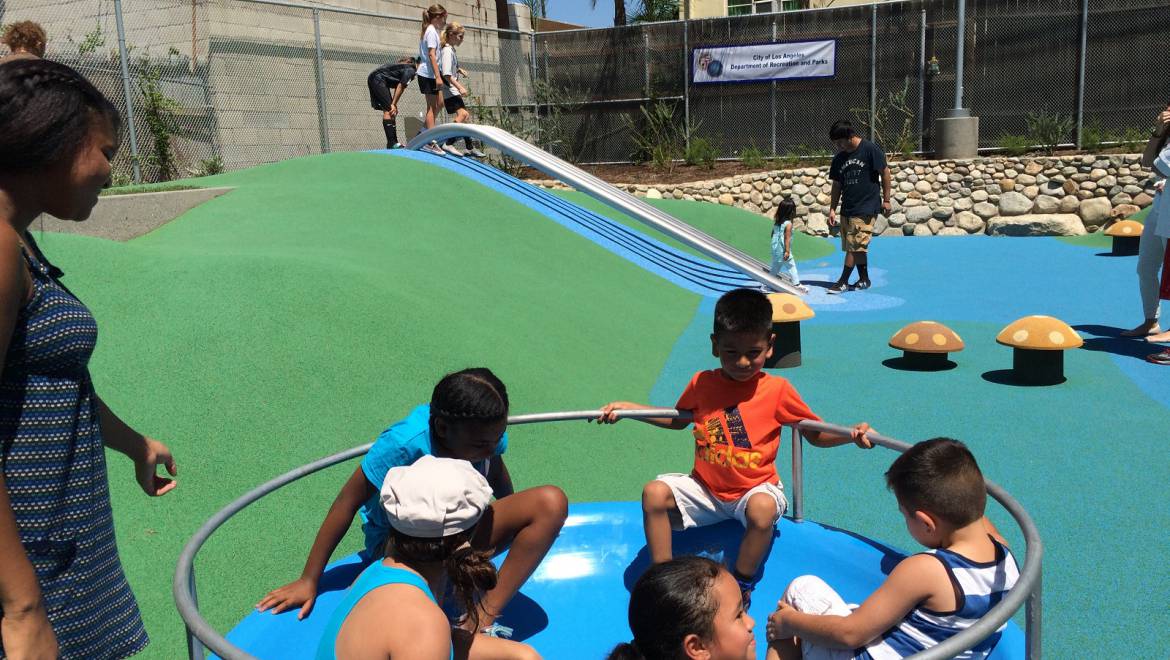 Children and families living in East Hollywood try out their new playground equipment during the Carlton Way Park ribbon cutting ceremony in July.

“For years I tried unsuccessfully to have this empty lot transformed into something positive for our community,” Miriam Del Cid said recently. She was referring to the 8,500-square-foot land parcel that long stood desolate on Carlton Way, a densely populated neighborhood in East Hollywood, California.

Del Cid had the opportunity to see her wish come true recently as she and dozens of her neighbors gathered to celebrate the opening of Carlton Way Park, a new, vibrant recreational area that was developed on the neglected lot by The Trust for Public Land’s Parks for People program.

“Each time we raised the issue of doing something good with the space, we were met with a lot of resistance from the property owner,” added Del Cid, who formerly served as vice president of the local Neighborhood Watch program.

Things have certainly changed for the better. Now, instead of a decaying, empty lot, 5927 Carlton Way serves as a safe and secure open space where residents of all ages can get the physical activity they need, engage with families and friends, and stretch and have fun. “This park is my dream come true,” said Del Cid. “Now our children and families have a great place we can go to unwind without having to get in our cars.”

On a recent hot summer day, children from the neighborhood eagerly took advantage of their new “front porch” swing set and playground. Residents spent time in the Fitness Zone trying out their new exercise equipment, and several groups animatedly discussed the many ways they will be able to use their new plaza space: For exercise, relaxation, and much needed recreation time with their families.

“I think the opening of this park can only bring good to people of this neighborhood,” said Miguel Angel Murcia, a neighbor and member of The Institute of Popular Education of Southern California (known as “IDEPSCA” for its Spanish-language initials), a partner nonprofit organization that supports day laborers. “They’ve done a great thing by building this park, and now it’s up to us to keep it clean and safe.”

Research shows that parks promote public health and revitalize local economies by making cities more energy-efficient and less vulnerable to the effects of climate change. For the 80 percent of Americans who live in or near a city, neighborhood parks offer the closest connection to nature. Yet, today there is only 1 park for every 3,000 people in America.

In park-poor neighborhoods, children play in streets, alleyways, or vacant lots instead of on grassy meadows or soccer fields. Or they simply stay inside—a national crisis of inactivity that has contributed to higher rates of obesity, diabetes, asthma, anxiety, and depression. The Trust for Public Land’s Parks for People programs work in cities and suburbs across the United States, spearheading programs and projects designed to increase and improve park and recreation space for everyone, particularly those residing in underserved areas.

“What I love about the Trust is that they work together with the community to understand their needs, and they engage residents in developing the park’s features and design,” said Angela Coron, managing director for Kaiser Permanente’s Southern California Region Community Benefit programs. “From rest areas and playgrounds, to walking paths and exercise equipment, every park is customized for its surrounding community, and really makes it possible for people who live in high population urban areas to get their recommended dose of exercise and physical activity.”

The grant funds provided by Kaiser Permanente in 2014 resulted in the opening this summer of Benito Juarez Park in Maywood, Carlton Way Park in East Hollywood, and Patton Street Park and Garden in Echo Park.