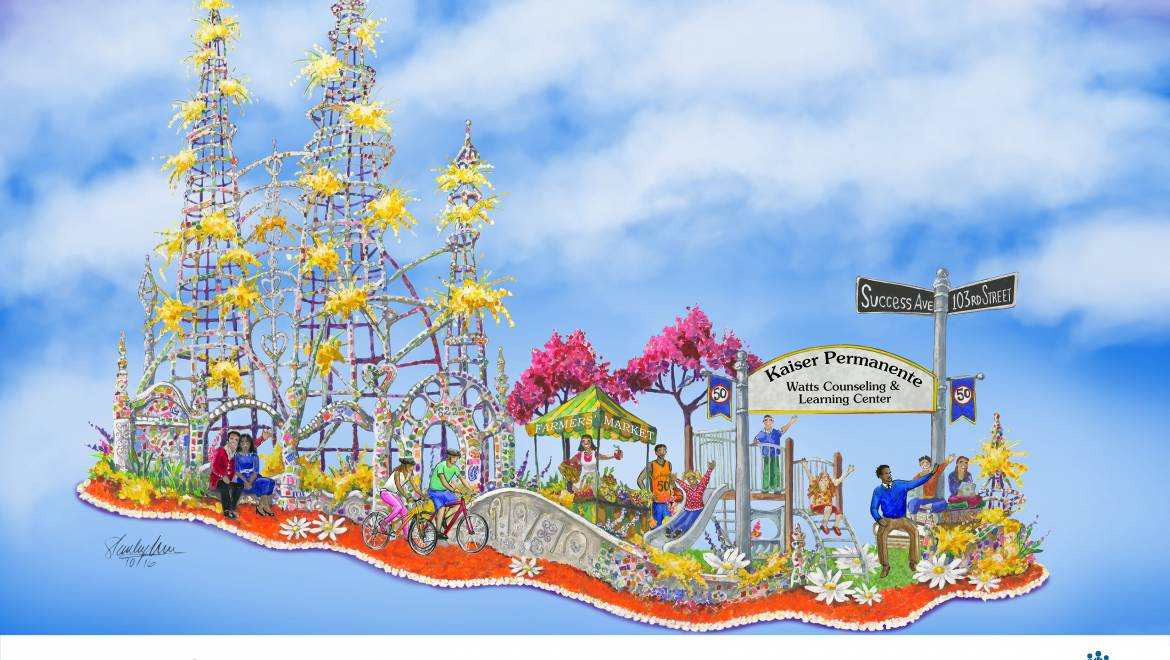 Kaiser Permanente will commemorate the 50th anniversary of the Watts Counseling and Learning Center with a Rose Parade® float celebrating “50 Years of Helping People Grow.”

In keeping with this year’s 2017 Tournament of Roses – Rose Parade® theme, “Echoes of Success,” Kaiser Permanente has announced that it will commemorate the 50th anniversary of the Watts Counseling and Learning Center with a float celebrating “50 Years of Helping People Grow.”

Since 1967, the Kaiser Permanente WCLC has provided counseling, outreach and educational services to the residents of Watts and the surrounding community.

The float features the street signs on 103rd Street and Success Avenue, site of the WCLC. The Center is a place to grow and learn, where counseling, educational, child development and outreach services are available to the community at no cost. Being a member of Kaiser Permanente is not a requirement of participating in the programs and services.

The Watts Towers are prominently featured on the float. Simon Rodia, an Italian-American artist, worked alone for thirty-three years to erect the Towers without the benefit of machines, welding equipment, scaffolding or schematics. The iconic structures consist of nine major sculptures constructed from steel and mortar then adorned with discarded glass, bottles, broken dishes, rocks, sea shells, ceramics, pottery and tile. The Towers stand today as a unique and powerful monument to the human spirit.

The float depicts healthy eating, active living activities such as enjoying a farmers market, riding bikes, and playing basketball, which are all promoted by Kaiser Permanente and the WCLC. Kaiser Permanente is working with trusted partners nationwide to help people grow and create healthy communities. We are sending a message — Kaiser Permanente is more than a health care system — we are rooted in the communities that we serve, both as a neighbor and a partner.

Float riders will include current and former WCLC clients and community members from Watts, Oregon and Washington D.C., representing community programs such as Safe Routes to School, East Side Riders, and The Watts Towers Art Center.

For more information, visit the Tournament of Roses website and follow the Kaiser Permanente Rose Parade Float on Facebook and other social media networks using the hashtags; #kpwatts50 #kptogether.